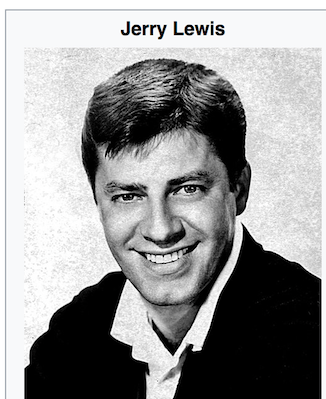 Yesterday, I was sad to learn that Jerry Lewis passed away.

I have fond memories of Jerry Lewis.

As a child, I recall being able to stay up late at my grandmother’s to watch The Jerry Lewis MDA Labor Day twenty-one hour television marathon.

The show was founded and hosted by actor and comedian Jerry Lewis.

I would watch in awe as Mr. Lewis would entertain millions of television viewers with his dance steps, interesting guests and comedic lines.

As Jerry Lewis spearheaded Muscular Dystrophy awareness, he had his health issues.

It is rumored that Jerry Lewis health challenges caused him to take Prednisone.

A significant amount of Prednisone may have contributed to large weight gain later in his life.

The legacy of the remarkable man, Jerry Lewis will live on forever.

You may find these HypoGal web links stories and health resources interesting:

Play It Forward So Other Do Not Have To Rewind.