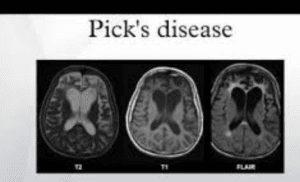 What Is Pick’s Disease?

Pick’s disease is a rare condition that causes progressive and irreversible dementia.

Pick’s disease is one of many types of dementias known as frontotemporal dementia (FTD).

Frontotemporal dementia is the result of a brain condition known as frontotemporal lobar degeneration (FTLD).

If you have dementia, your brain does not function normally.

As a result of Pick's disease; a person may have difficulty with language, behavior, thinking, judgement and memory. These difficulties are similar to patients with other types of dementia, a person with Pick’s disease may experience drastic personality changes.

Patients with Alzheimer’s may also display Pick disease symptoms but Pick’s disease usually only affects certain areas of the brain.

What Is The Average Age Of A Patient With Pick’s Disease?

People as young as 2o may develop Pick’s Disease.

However, it usually begins between ages 40 and 60.

The average age at which Pick’s disease begins is 54. Pick’s disease, along with other FTDs, is caused by abnormal amounts or types of nerve cell proteins, called tau.

Scientists don’t yet know what causes these abnormal proteins to form. But Geneticists have found abnormal genes linked to Pick’s disease and other FTDs.

Pick’s disease is a progressive disease and the outlook is poor.

At this time there is no cure to Pick's disease

People who have Pick's disease slowly get worse.

The underlying cause of Pick's disease is unknown. In some cases, the disease runs in families.

The course of Pick's Disease symptoms varies from each person.

While there is no treatment to slow the progression of the disease, medications can be used to treat individual symptoms.

Patients with Pick's disease may have personality changes so severe that their loved ones do not recognize them as the people they were before the Pick's diagnosis.

Niemann-Pick disease types A and B is caused by mutations in the SMPD1 gene.

The sphingomyelinase enzyme is found in lysosomes, which are compartments within cells that break down and recycle different types of molecules.

The three most commonly recognized forms are Niemann-Pick Types A and B (ASMD or Acid Sphingomyelinase Deficiency) and Niemann-Pick Disease Type C (NPC).

Niemann-Pick's Disease Type A is a severe neurologic disease that leads to an early death, usually by 2 to 4 years of age.

Niemann-Pick's Disease Type B generally have little or no neurologic involvement and may survive into adulthood, though there may be health complications.

Niemann-Pick's Disease Type C is a type of disease when patients are not able to metabolize cholesterol and other lipids properly within the cell.

Without being able to metabolize cholesterol excessive amounts of cholesterol accumulates with the liver, spleen and large amounts of other lipids accumulate in their brain. Unfortunately, Niemann-Pick's Disease C is always fatal.

Play It Forward So Others Do Not Have To Rewind

Posted in Diseases, Pick's Disease
← What Is Cervical Dystonia?What Is Diabetes? →