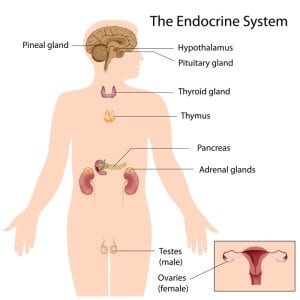 Click, "HERE" to see photos of the Pituitary Gland.

The endocrine system is made up of glands that make hormones.

Hormones are the body's chemical messengers.

The body's hormones carry information and instructions from one set of cells to another.

Click, here, to view photos of the Endocrine System.

WHAT ARE THE PARTS OF THE ENDOCRINE SYSTEM?

While many parts of the body make hormones, the major glands that make up the endocrine system are the:

The pancreas is part of the endocrine system and the digestive system.

The endocrine system is regulated by feedback in much the same way that a thermostat regulates the temperature in a room.

The hypothalamus is located in the lower central part of the brain.

The area of the brain is important in regulation of satiety, metabolism, and body temperature.

In addition, it secretes hormones that stimulate or suppress the release of hormones in the pituitary gland.

The hypothalamus also secretes a hormone called somatostatin, which causes the pituitary gland to stop the release of growth hormone.

The pituitary gland is located at the base of the brain beneath the hypothalamus.

The size of the pituitary gland is about the size of a small pea and this gland is often considered the most important part of the endocrine system.

The pituitary gland is thought to be one of the most important part of the endocrine system because the gland produces hormones that control many functions of other endocrine glands.

If the pituitary gland does not produce one or more of its hormones or not enough of them, it is called hypopituitarism.

TWO PARTS OF THE PITUITARY GLAND

The pituitary gland is divided into two parts: the anterior lobe and the posterior lobe.

The anterior lobe produces the following hormones, which are regulated by the hypothalamus:

The posterior lobe of the pituitary gland produces:

Both Vasopressin and Oxytocin hormones are not regulated by the hypothalamus.

Pictures of the Pituitary Gland.

The thyroid gland is located in the lower front part of the neck.

The parathyroid glands are two pairs of small glands that are attached to the surface of each side of the thyroid gland.

The adrenal glands are triangular-shaped glands that are located on top of each kidney.

The adrenal glands are made up of two parts:

The pineal gland, is located in the middle of the brain.

Click, here, to view a photo of the Pineal Gland.

The main source of the sex hormones are the reproductive glands.

In males, the testes, located in the scrotum, secrete hormones called androgens; the most important of which is testosterone.

In females, the ovaries, located on both sides of the uterus, produce estrogen, progesterone and eggs.

Pictures of the male and female reproductive system.

The pancreas is an elongated organ located toward the back of the abdomen behind the stomach.

The pancreas has digestive and hormonal functions.

One portion of the pancreas, the exocrine pancreas, and secretes digestive enzymes.

The other portion of the pancreas, the endocrine pancreas, secretes hormones called insulin.

The following, link, will take you photos of the Pancreas.

YOU MAY ALSO FIND THE FOLLOWING PITUITARY GLAND RESOURCES HELPFUL:

You can find shortcuts to living with a chronic illness on the  HypoGalBlog. 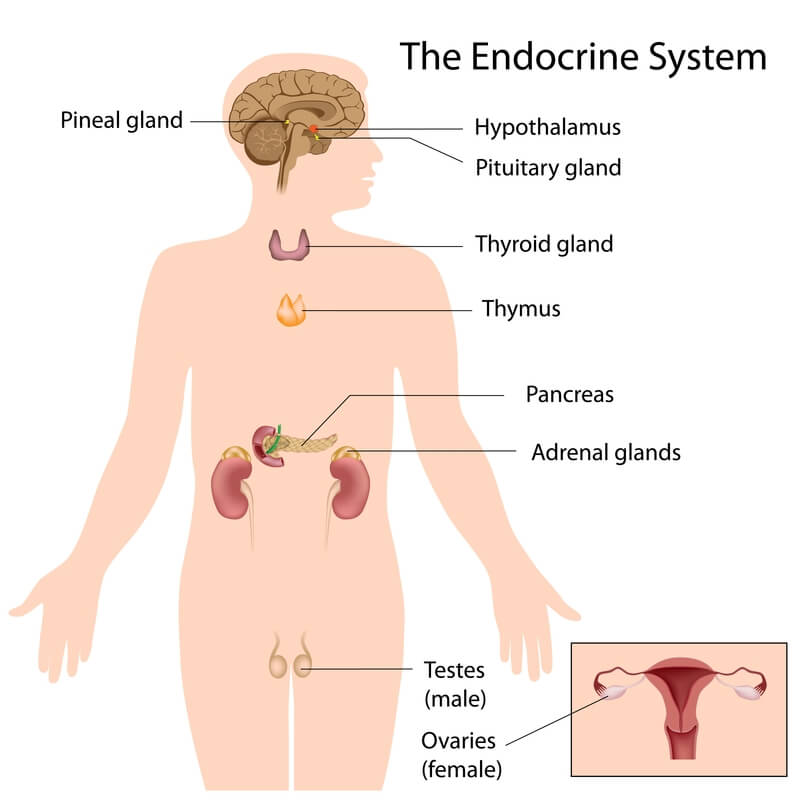