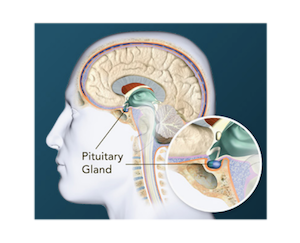 THIS PAGE IS DEDICATED AS A DIRECTORY TO SHEEHAN SYNDROME INFORMATION, PITUITARY FUNCTION AND ADRENAL INSUFFICIENCY

The rare disease Sheehan’s Syndrome is a disease that affects the function of the pituitary gland and is caused by severe blood loss during or after childbirth.

The symptoms of Sheehan’s Syndrome may develop gradually, or increase over time.

Sheehan’s Syndrome is a rare disease and the disease is not always easy to diagnose.

Sheehan’s Syndrome symptoms are frequently misinterpreted and given incorrect labels.

The symptom of extreme fatigue associated with Sheehan’s Syndrome is often categorized with motherhood.

The symptoms of Sheehan’s Syndrome are caused by the hormone deficiencies of the pituitary gland a.k.a Master Gland.

Click on the web link below to learn more about Sheehan's Syndrome Symptoms:

Even with extensive lab tests, your lab tests results can be normal, you may be very ill and you may have Sheehan’s Syndrome.

Almost all Endocrinologists and medical information state that the IGF-1 (Growth Hormone ) is the first pituitary gland hormone to fail in Sheehan’s Syndrome.

However, my lab test results for my IGF-1 was always within standard medical labs and my Growth Hormone was one of my last hormones to fail.

In order to make a positive diagnosis, an ACTH Stimulation Test should be given.

An Arginine Stimulation Test should be given to test your Growth Hormone, IGF-1.

On a personal note, my CBC lab tests for Sheehan’s Syndrome were within normal range. However, I did fail both the stimulation test for ACTH and Growth Hormone.

I have listed lab tests below that will help you navigate a possible Sheehan's Syndrome diagnosis:

Life with a chronic illness can be frustrating, difficult and overwhelming at times. Support groups can be a valuable tool to help you manage your condition.

Each adrenal gland weighs 4–5 g in an adult, about the size of pea.

Adrenals are first detected at 6 weeks' gestation.  An adrenal gland is made of two main parts:

The adrenal gland is important to your body because it releases essential body hormones.

If adrenal gland disease occurs then the body may release to many hormones into the body or not enough hormones.

These are some adrenal gland diseases;

If you would like to learn more about the anatomy of the adrenal glands then click on the following web link;

The pituitary gland function is extremely important to your body because it handles and directions numerous functions that are required to live each day.

In fact, the pituitary gland is so significant that it is also known as the “Master Gland”.

The pea-sized, Master Gland gland directs other organs to do function.

The major two lobes of the pituitary gland are the anterior lobe and posterior lobe.

Each pituitary gland lobe has its own function.

This web link will take you to a photo of the thyroid gland.

I hope the above photo will help you to better understand the parts of the thyroid gland.

Click Here, to read my story with Sheehan's Syndrome.

“Play It Forward So Others Do Not Have To Rewind.”

Learning How To Live With Cystic Fibrosis

Free On Amazon Books Through Monday, February 21, 2022; Can You Fix My Broken Heart.

As My Right Foot Drops, I Fall Over And I Know What I Need To Do

DirectLabs.com Lets You Order With Own Labs Without A Doctor

What Is A Chronic Illness?